Halloween is this Saturday, October 31st!

Flowers are a wonderful, integral part of any Halloween celebration, adding a pop of color or--depending on the flowers/props used--a bit of spookiness.  Here are a few floral ideas for a festive look:

* Have an arrangement created in a short glass cylinder, which can then be tucked into a plastic trick-or-treat pumpkin, a plastic cauldron or even a fresh pumpkin.  Makes a fantastic, eye-catching centerpiece!

* Another spooky centerpiece is to use white flowers in a black container, but take it from elegant to evil by affixing little fake black insects such as ants or cockroaches (usually available at the local dollar store) all over the flowers. Yikes!

*Curly willow branches spray-painted black can be tucked into houseplants or placed in a tall container, creating a wonderful silhouette.

* Spanish moss looks creepy, with its wispy tendrils draping down.  Hang it off plants, corners of shelves, and places unexpected.  Spoooooky!

* If you're hosting a Dia De Los Muertos party, don't forget the marigolds! These brilliant orangey-yellow flowers are favored by Mexicans for the Day of the Dead celebrations, with the flower indicating the fragility of life.

* And for those who will be sporting sugar skulls (those creepy grinning colorful painted faces), a blooming rose is necessary to complete the look.  Purchase a few roses earlier in the week, leave in a vase for a couple days at room temperature to open, then choose the most-bloomed flower to tuck behind your ear to complete the look.

* Dead flowers tied in a bow have a special creepiness. . .perfect to place at the foot of a grave in the the cemetery you've created in your front yard! Buy flowers prior to Halloween, and enjoy them fresh in your home.  Then once they start to fade away, pour the water out of the vase and allow them to die and dry.  A large black satin ribbon to bind the arrangement together completes the look.  Try red roses for a particularly morbid bouquet....

*Here's looking at you. . .  Use either spider mums or gerbera daisies for this fun quick craft: purchase googly eyes at the local craft store, then affix to flowers.  Tiny eyes look great on spider mums, while a single, big eyeball is hysterical peering out from the center of a gerbera daisy. Most of these eyes have a glued backing, but a drop of craft glue helps to keep it firmly in place.

*It's so easy to achieve the popular candy corn vase that is so popular.  Use cube vases in the 4" and 6" size (similar sized cylinders also work well for this trick)  Put the smaller vase into the larger, taking care not to fill it too high with water.  Design your arrangement, then carefully use a paper towel between vases to soak up any errant water.  This step is important so that the candy does not clump!  Once you are certain it is dry, start putting the candies into the space between vases.  Candy corn looks awesome, as does black jelly beans.  (We've also seen this done with whole coffee beans or cranberries during the Christmas holidays for a unique look.)


HAPPY HAUNTING!
Posted by Unknown at 9:56 AM No comments:


Bosses Day has been around since the late 1950s, created by an Illinois woman who--quite coincidentally, we're sure--had a boss who also happened to be her father.  She thought all bosses needed a day of recognition, and then-Governor Otto Kerner agreed, passing a bill that recognized a day for bosses, back in 1962.  However, Hallmark did not start offering Boss's Day cards until 1979, and surprisingly, the holiday really didn't take off until just recently in 2007, when it made an almost 30% jump in popularity. 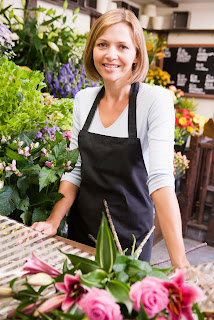 What to send to your boss to let him or her know you appreciate everything they do for you?  How about bright flowers to adorn their desk?  Something like our Autumn Essence (CFE512) offers a bright pop of color and will make your boss think about that raise she's been considering for you, every time she looks at it.  For something a little more masculine, the Garden Of Zen (CFE369) looks great in any office, and the succulent plants are both low maintenance and trendy.  Shop here.

For all the things your boss does for you. .  .lets you take emergency days, no questions asked . . . looks the other way when you're occasionally a few minutes late. . . thanks you for all the times you make him look good. . . realizes that every now and again, you want to leave early to catch your son's soccer game or daughter's ballet recital. . . makes a small deal out of your mistakes and a big deal out of your triumphs. . . helps to get the job done. . . manages effectively. . . uses humor, humility and empathy in everything he does. . .

Yeah.  All great reasons to recognize the big guy (or gal!) on Boss's Day, October 16th! 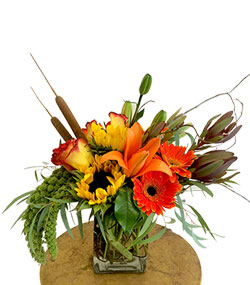 While there is no registration or census that lets us know exactly how many winter visitors there are to Arizona, estimates are somewhere around 250,000 to 300,000 just in the metro Phoenix area each year.  (And it looks like they have all landed in east Mesa in just the past few weeks, if the sudden influx of out-of-state vehicles has anything to do with it!)

A large percentage of these visitors hail from Alberta, Manitoba, Saskatchewan, British Columbia and Ontario.  If you've got Canadian friends who roost in the valley during the winter, surprise them with a fall bouquet or centerpiece for Canadian Thanksgiving, which falls on October 12th this year.  Much like the US Thanksgiving, it is a day of thankfulness for the harvest, for the bounties of the year.  So of course, there is a huge meal (which is much like what we have here with the '3 T's:  Turkey, Taters and Too much of everything else).

If you are at all lucky, you'll be invited to this festivity.  Then next month, you can invite them to your big shindig on Thanksgiving Day (November 26th) and compare notes!

Posted by Unknown at 1:47 PM No comments: